For those who are into the financial market business in Nigeria, it is not news that most Nigerian banks reject old and lower denominations of the United States Dollars. It has been the norm for several years even though little has been reported about it.
In a circular released on 9th April 2021, the Central Bank 🏦 of Nigeria ordered all BDCs and Deposit Banks to stop the rejection of old Dollar bills as well as lower denominations of the currency. The details was contained in a statement signed by its Director, Currency Operations Department, Ahmed B Umar.
The CBN had to make the decision after several complaints from members of the public. The apex bank even threatened severe sanctions if any Forex dealer (BDC) or deposit bank fail to comply with the directive. Here is the link to the official circular
So What Dollar Bills Can Be Termed Old Notes?
Well, old notes could be any Dollar bill that is older than 10 years. So in 2021, any Dollar bill that was printed before the year 2009 can be termed an old note which the banks have been rejecting before the CBN circular. So whenever you go to buy the Dollar from a BDC or from a deposit bank 🏦, always check the date on the currency.
How Can Old Dollar Bills Be Identified?
Well it is quite simple to identify old Dollar Bills.
Simply check the date of the series. The series date, which shows the year a note was printed, can be located just at the lower right quadrant of the note in between the Washington image and the signature of the Secretary of the Treasury. This can be seen in the image below: 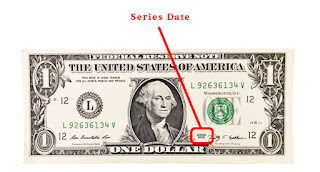 So when next you go to buy the Dollar, buy newer bills 😊.
What Are The Lower Denominations Of The Dollar?
All the Dollar denominations include the following bills: $1, $2, $5, $10, $20, $50, and $100. The lower denominations facing rejection at the banks are the $1, $2, $5, $10 and $20 bills.
What Does The CBN New Directive Mean For Businesses?
The Central Bank of Nigeria directive on sanctioning banks that reject deposits of the old and lower denominations of the US Dollars has returned smiles on the faces of business people as they can deposit these lower denominations which are cheaper to buy and later withdraw their monies to sell at a higher rate. You need to see how you can make money from buying these lower denominations  here.
Share on Facebook
Share on Twitter
PreviousThe Money Making Tricks In Depositing Lower Denominations Of Foreign Currencies To Your Bank 🏦 Account In Nigeria
NextCBN Commences Immediate Refund Of Capital Deposits And Licensing Fees To BDC Promoters With Pending License Applications